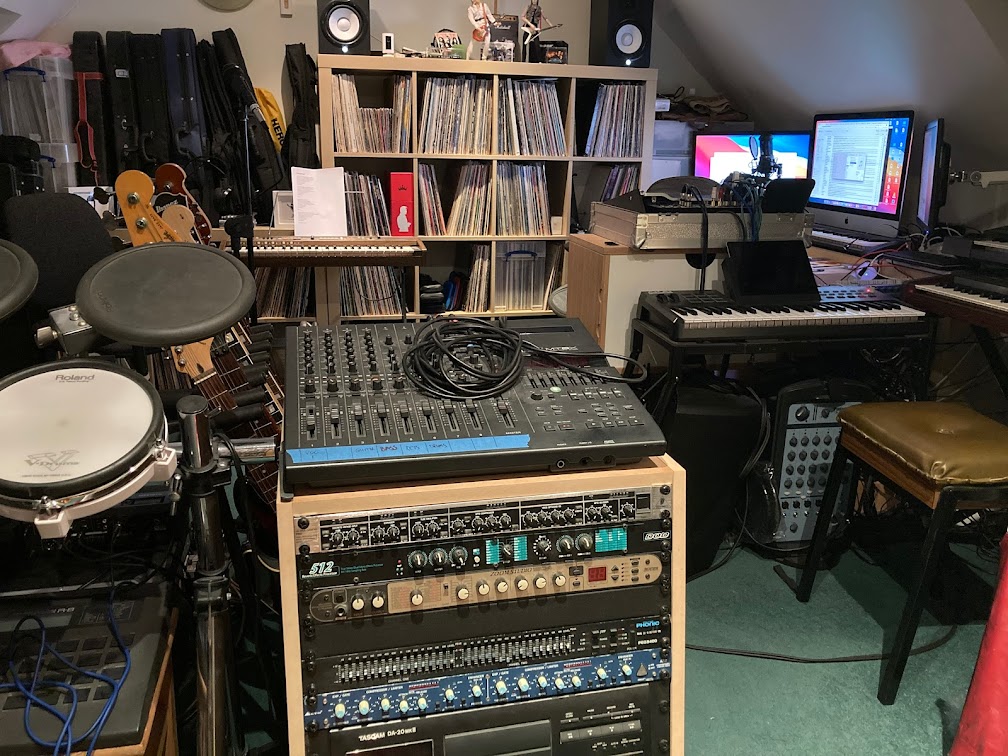 We don’t consider ourselves primarily a performing band. Of course, from time to time we do step out onto the stage – usually for a good cause like Oxjam or a fundraiser for humanitarian relief in Syria we helped to organise in aid of Medecins Sans Frontieres – but typically we like to tinker with songs and production in our small studio.

Our DAW of choice is Reason 12, and we like it because it has a very analogue feel and workflow in a digital domain. Added to that we have piles of vintage keyboards and drum machines and a wall of guitars, basses and similar stringed instruments. Augmenting the Roland v-drums are odd percussion instruments we’ve collected from here and there, including a West African balafon we used to great effect through a digital delay pedal on ‘I Hear Drums’. When all else fails, we’ll rummage through the kitchen or garage for something to hit or shake to make a sound that can be digitally manipulated later.

There are few rewards for independent music makers these days, but the joy of making a track to be proud of remains a compelling reason to keep composing and recording. 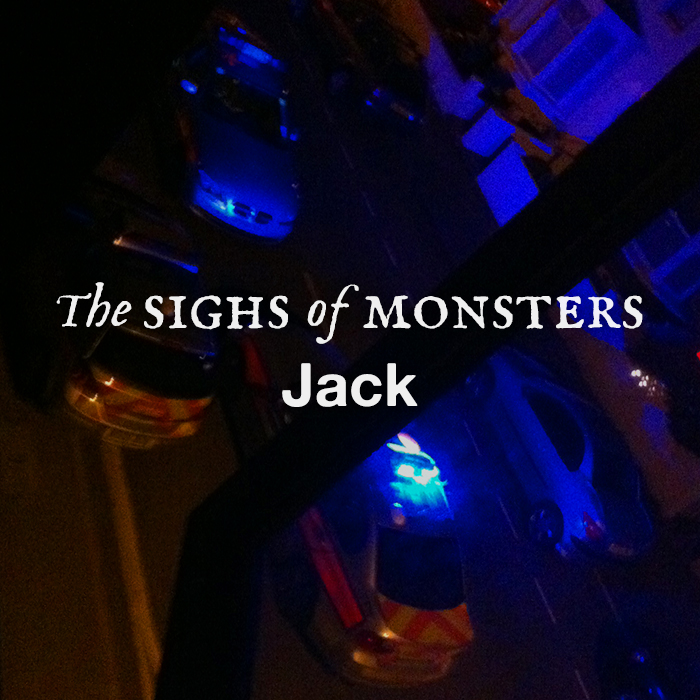 ‘Bird Shot’, the new single by The Sighs of Monsters takes aim at Russian president Vladimir Putin, the latest crazed despot to threaten the world with annihilation. From a satirical fictionalised newsroom of state propaganda channel RT, the video sets Battleship Potemkin imagery against the war crimes of
Russia’s new Tsar.

The brutality of the Tsar’s army portrayed in Sergei Eisenstein’s 1925 Soviet film is one of the founding narratives of modern Russia, so the juxtaposition holds a mirror up to their own brutality in Ukraine today.

“Was it worth the blood and the pain?” the lyrics ask, as they poetically examine the mindset of “your mad king on the grounds, writing insane”.

The band’s lyrics typically deal with the personal. “We are not a political band,” says bassist Brett Houston-Lock, “but when a world event takes on a moral and existential dimension such as this, as artists, we cannot stay silent. It is not political, it is humanitarian.”

“Growing up in South Africa during the apartheid years has given me some insight into societies led by paranoid leaders who have the police, the military and the state media at their disposal,” says Houston-Lock, “so I think I understand at least some of the dynamics at play in Russia today, and must have in previous societies led by maniacs with a mad plan for the world.”

Previously the band released a single called “After Charlie” in response to the murders of Jews in Paris in the wake of the Charlie Hebdo massacre. Tackling antisemitism, the song pointed to growing attacks on Jews in Europe and noted “this is not occupied Europe in 1941. This is the present day. This is contemporary”.

“We certainly don’t want to go down the rabbit hole of the increasingly polarised and identity-driven politics poisoning social media these days, but we live in this world and sometimes we have to speak up,” he adds.

The image above shows a scene from the Bird Shot video, in which we montage imagery from Battleship Potemkin with our own ersatz news footage. Dean plays the reporter while Chris plays a war victim in a homage to Eisenstein’s famous scene. The video is set at a fictitious TV News channel as things unravel for the mad tyrant.

Watch the video for Bird Shot on YouTube, or get the single from Bandcamp.

The video is set at a fictitious TV News channel as things unravel for the mad tyrant.

This track is a collaboration between The Sighs of Monsters and poet David Chislett. The poem “More Than Blue” appears in his new collection of poetry With All Of You and we were tasked with setting it to music, along with other artists who chose other works.

The poem references the cultural impact of New Order’s “Blue Monday” as it pounded out of the loudspeakers of the clubs in the 1980s, as the author “found his tribe”. We’ve made some cheeky references to it in our musical treatment.

From “With All Of You” by David Chislett

A music video for “Superman In The Silence” by The Sighs of Monsters from their second album, ‘Lie’ available on CD and Digital from Bandcamp.

This video is composed of public domain footage of the 1941 Fleisher/Famous Studio production of ‘Superman’.

Our new album DUST was released today. It is available for digital download or on CD via Bandcamp.

“And, behold, there came a great wind from the wilderness, and smote the four corners of the house, and it fell upon the young men, and they are dead; and I only am escaped alone to tell thee.”

Fate is indifferent. It is neither unkind nor unjust. Nevertheless, it has left us here to tell you the stories of the dead and the defeated. You will have your own tales, no doubt, which occupy your thoughts at the most unexpected of times, but this is our testimony which we hope to share with you.

Without the dread of grief and death, there cannot be the the ecstasy of joy and innocence unbridled. One holds a mirror to the other. And, be that as it may, we can avoid none of it so let us proceed together. Let us speak of such things. 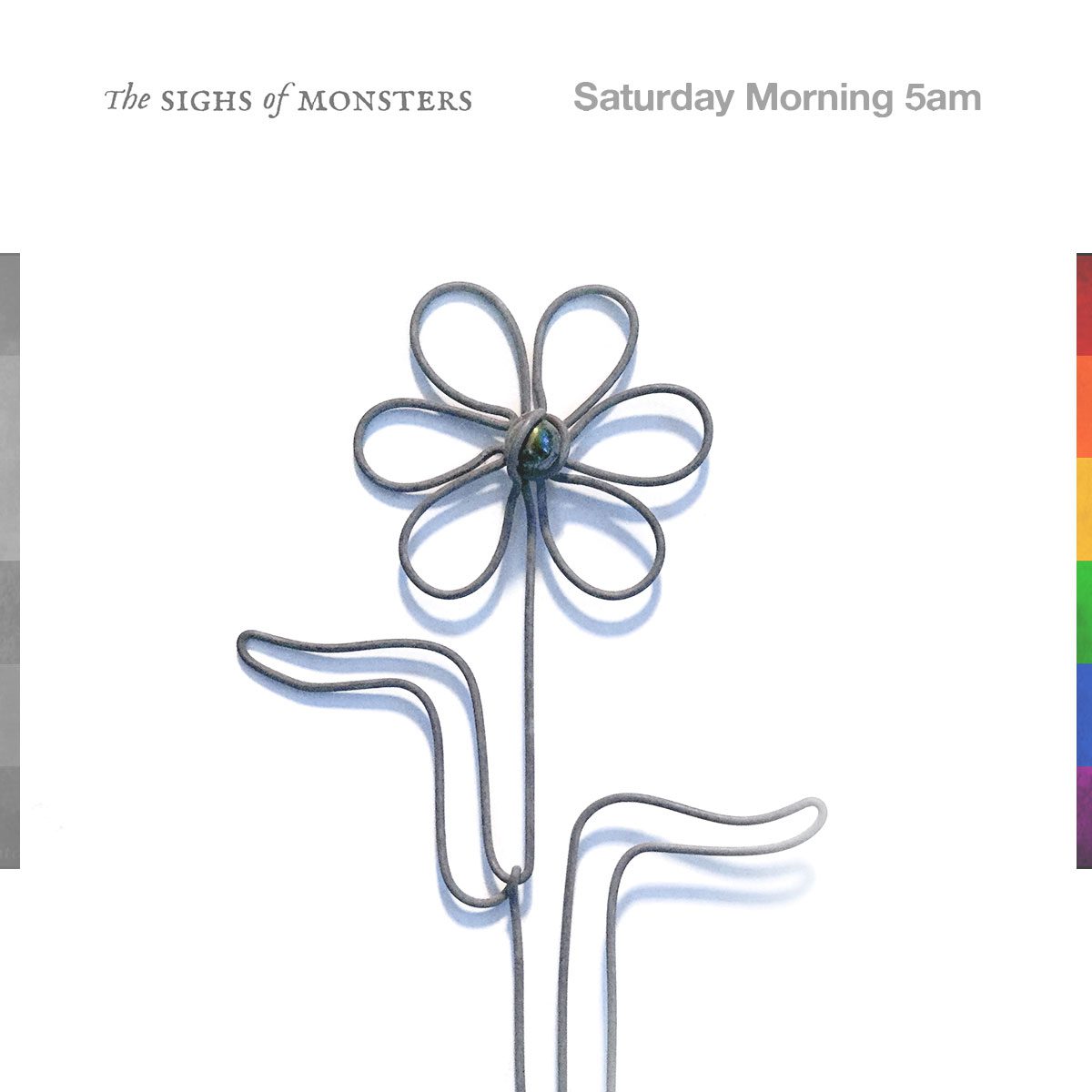 We are very excited that our new track Saturday Morning 5am has been selected as “Record of the Day” by that eponymous music news service.

“London-based band The Sighs Of Monsters manage to brilliantly distill so many elements of dance culture over the past 40 years into this one track that you’ll thoroughly enjoy picking out the styles and eras as it throbs along. Telling the story of someone finding love in a club, it’s described by the band themselves as being a bit like The Smiths’ classic How Soon Is Now, but with a happy ending this time round. Along the way, there are affectionate nods to the 1990’s rave scene and the influence that Madchester played upon it, with Oakenfold, Farley, Heller and Weatherall-esque production elements bubbling away, including pulsing basslines and Italiano piano stabs. You’ll hear Krautrock, disco, and house all in there too. “

Read more at Record of the Day.